Exogenous Insulin
Insulin is hormone that is used as a medicine to treat elevated blood glucose levels in number of conditions including type 1 diabetes, type 2 diabetes, gestational diabetes, and complications of diabetes such as diabetic ketoacidosis and hyperosmolar hyperglycaemic state. 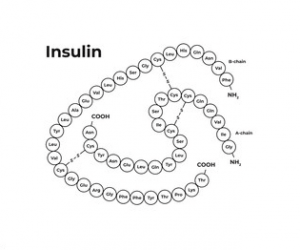 Since insulin is a protein, it must be given as an injection, usually subcutaneously, but occasionally can be injected into a vein or muscle. Insulin can be delivered via a syringe, insulin pen or insulin pump depending on the preference of the person with diabetes.
Syringe 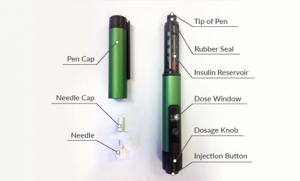 In an individual that does not have diabetes insulin is produced in the islet cells of the pancreas. This helps regulate glucose (the body’s primary energy source) from carbohydrates where it then enters the bloodstream. Insulin helps glucose enter the cells where it can be used as energy.
Insulin also helps store excess glucose in the liver (as glycogen). When insulin levels are low the liver will release glycogen in the form of glucose. Between these two steps endogenous insulin allows glucose levels to be kept within a narrow range.
The goal of insulin therapy is to keep an individual with diabetes (no matter what type!) well by keeping blood glucose levels in a healthy range. The heathy glucose level range for each individual depends on many factors including age, how long the person has had diabetes, other health conditions and medications that cause hypoglycaemia (person centred care).
While there are many different types of insulin, the two main roles of therapy are to keep an individual’s glucose levels stable when a person is not eating (when the liver is releasing glucose from its glycogen stores) with long, ultralong or intermediate acting insulin and to maintain glucose levels after eating, using short or rapid acting insulin.
Formulations:
Also known as basal or background insulin this is usually the first type of insulin therapy that is initiated in type 2 diabetes. These insulins can be given irrespective of a meal and are administered once or twice a day. Examples of basal insulin include Detemir. (Levemir), Glargine (Optusilin, Semglee, Toujeo), Degludec (found in Ryzodeg), Protophane, and Humulin NPH. This helps prevent glucose levels rising after meals and are usually given with each or just before a meal. They are often referred to a mealtime or prandial insulin. Examples of these include ultra-rapid acting (Fiasp), and rapid acting insulin Inulin lispro (Humalog), Insulin aspart (Novorapid), and Insulin glulisine (Apidra). There is also premixed insulin that is a combination of short acting and basal insulin in the one dose. This is usually given to decrease the number of injections per day. These include.

Please note that the content on this site is designed for the Healthcare Professionals.
You must register to enable the services.